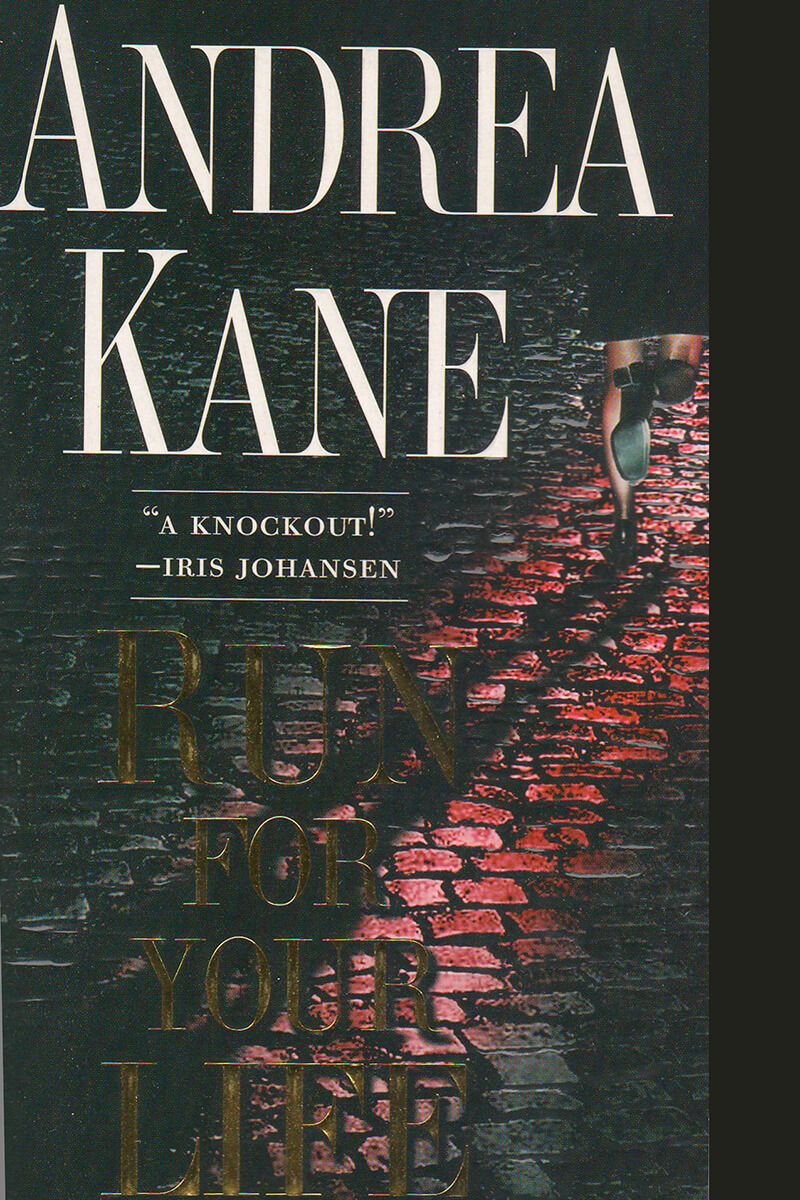 Run For Your Life
by Andrea Kane

Manhattan attorney Victoria Kensington is deeply alarmed when she runs into her sister, Audrey, in Central Park-clad in a hospital gown and fleeing from unknown pursuers. As Audrey collapses at her feet, warning about danger, Victoria rushes for help. When she returns, Audrey has vanished from sight.

Despite threats against her life, Victoria vows to discover her sister's whereabouts. She works alone until the only man she ever loved, Zachary Hamilton, suddenly appears in New York. Assigned to investigate a worldwide drug syndicate, he suspects it may tie in to Audrey's disappearance. Together, Victoria and Zach race against the clock to crack the deadly drug ring and find Audrey. While they work, they find the white-hot electricity between them recharging to a fever pitch. Pursuing the shocking truth that might tear Victoria's family irrevocably apart, she and Zach begin to unravel a complex web of deceit-which echoes terrifyingly back to Victoria's own life.

They were closing in on her.

She could feel it.

Like a hunted animal she whirled around, backing away from the danger that threatened. Her eyes darted around furiously. Cowering in the shadows of the trees, she searched the path, terror vibrating through her.

She ran. Sweat drenched her body. She staggered and nearly fell. Regaining her balance, she sucked in short bursts of air, her burning lungs unable to get enough oxygen to satisfy her racing heart. She stopped, unable to go on, gasping as she stumbled down the footpath.

Not a second to waste.

Detection would soon be a certainty.

Even the oncoming rainstorm wouldn't be able to conceal her. They'd followed her. They knew just where to look, and what to look for. Her bright yellow robe beckoned like a bulls-eye. They'd find her. They'd punish her. She was terrified of that. But she was more terrified of what was happening to her.

She was desperate. She needed help. Now. Before it was too late.

She had to get to her sister.

A few raindrops fell, a welcome chill against her overheated skin. The relief was short-lived. The droplets intensified to a steady drizzle, dampening her robe and causing it to cling to her skin.

Her teeth began to chatter.

Her limbs faltered, and her knees buckled.

Reeling, she grabbed a tree trunk for support. She fought the nausea and the dizziness, blinking as she tried to clear her head and regain some strength.

It was no use. Her body was losing its fight. Her heart was bursting out of her chest. She had no energy left to run. And nowhere to run to.

Her sister. She was her only chance.

Why isn't she here yet? she thought, scanning the park with eyes barely able to see. Where is she?

The path was deserted. The rain was coming in a thin, steady stream now. Maybe she'd stayed in bed. Maybe the rain had dissuaded her. Maybe this entire reckless attempt had been for nothing.

In that case, it was over. The desolate park grounds would make it easy to find her. To catch her. To imprison her for good.

They'd be here any minute now.

Hysteria bubbled up inside her.

Nearly blinded by dizziness, she staggered down the path, no longer certain where she was going, but propelled by the will to live.

A twig snapped in the distance.

Her head jerked up.

Rhythmic footsteps sounded from around the bend. Plod. Plod. Definitely footsteps. She hadn't imagined them. Not the rapid strides of one in pursuit, but the measured gait of a jogger. The tempo drew nearer-- not from behind her, from ahead. It continued to approach, the strides close enough now to be accompanied by the metered pants of someone dedicated to his or her run.

Black spots were dancing before her eyes. Her heart rate had accelerated to the point where she couldn't regulate her own breathing. Her body was shaking uncontrollably. Please, she prayed silently. Please.

A flash of color.

Red. A red jogging suit with a white stripe down the pants legs-- the gift she'd given her sister for her last birthday.

She lunged forward, determined to be seen. Her limbs failed even as she did. The ground rushed up to meet her. She felt its impact slam against her shoulder, then her back. A stick jabbed into her arm.

Raindrops struck her face. A gentle hand wiped them away.

As if from a great distance, she heard the familiar voice calling her name. She opened her eyes, but, try as she would, she couldn't see anything. Only the blackness.

Her lips moved, and she heard her own broken gasps. Or did she? She was speaking. Then why couldn't she hear herself?

Again she tried. Her mouth formed the numbers.

But, like a suffocating blanket, the darkness choked them into silence.