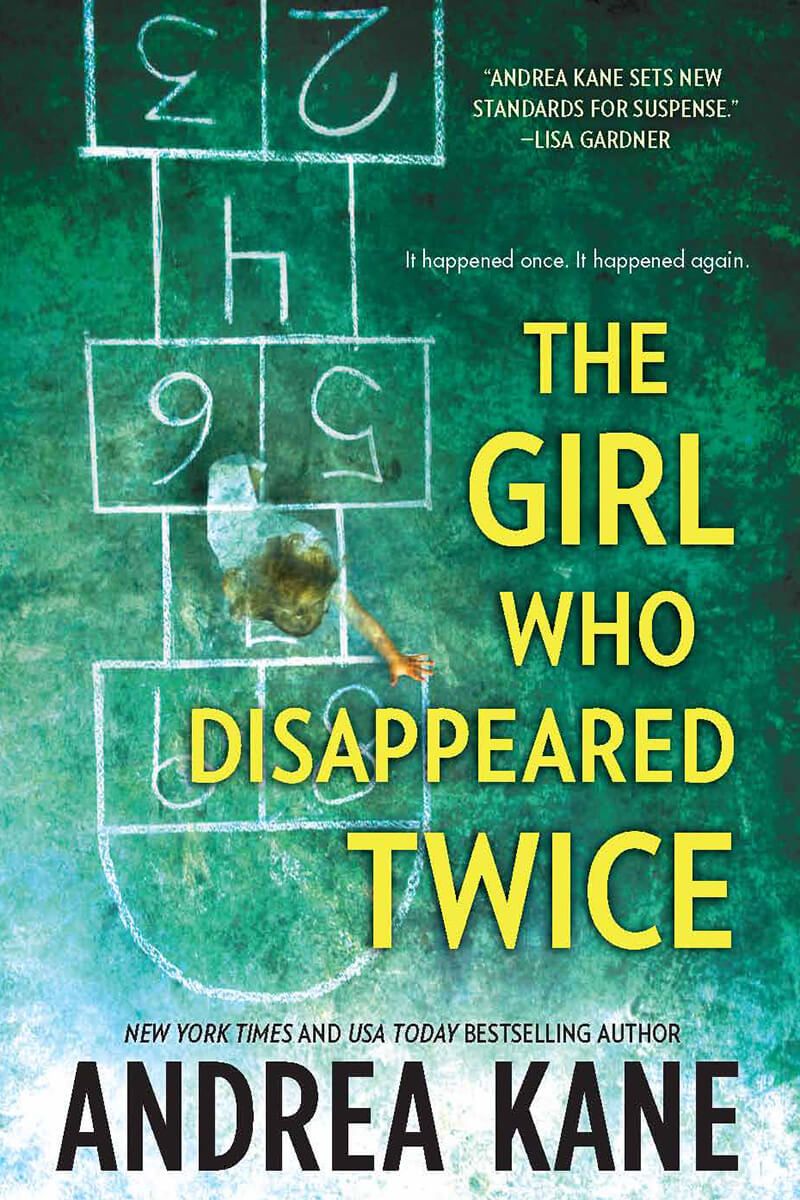 The Girl Who Disappeared Twice
by Andrea Kane

Despite all her years determining the fates of families, veteran family court judge Hope Willis couldn't save her own. She never saw the car containing her kidnapped daughter, struggling to get out. Now she's frantically grasping at anything that might result in Krissy's rescue. Her husband dead-set against it, she calls Casey Woods, the head of Forensic Instincts, a renegade team of investigators, with a reputation for doing whatever it takes to solve life-or-death crimes.

A behaviorist. A techno-wizard. An intuitive. A former Navy S.E.A.L. A retired FBI Victim Recovery dog. All unconventional operatives. All with unique talents, skills, and personal reasons for being part of Casey's team.

Now they're up against what appears to be a precision kidnapping of a five-year-old. A strange distraction belies Hope Willis' desperation. Her husband, a cut-throat defense attorney, has a clear agenda of his own. Together, they have more than their fair share of enemies. Motives and suspects abound. But beneath the surface, lies a decades-old secret that threatens Forensic Instincts' investigation, along with any hope of finding Krissy.

Time is running out, and even with the little girl's life on the line the authorities are working round the clock within the confines of the legal system. Casey knows that staying within those confines is not enough. Not when the difference between bringing Krissy back alive and disappearing forever could be as shallow as a suspect's rapid breathing, or as deep as Hope's dark family history.

When six-year-old Felicity Akerman went to bed that night, she had no idea that life as she knew it was about to change forever.

She settled under the light cotton blanket and put her head on the pillow, her long blond hair tied back in a ponytail because of the heat. She was wearing her favorite short-sleeve nightshirt with the bright orange soccer balls on it. She had to wear it tonight. It was like a gold star on a perfect spelling test. A prize. A big win.

That's what today's game had been. The doctor hadn't been too sure about letting her play. Neither had her mom and dad. But she'd talked them into it, and gotten the okay she was holding her breath for. No one understood how miserable she'd been, sitting on the sidelines all summer long since she broke her arm. But it was better now. No more cast. No more pain. No reason to wait.

She'd proved that today on the playing field at Pine Lake Soccer Camp. She'd scored three out of her team's four goals.

With a happy smile, she rolled onto her right side, reflexively protecting the left arm that had been in a cast for seven long, hateful weeks. Her smile widened as she remembered she didn't have to do that anymore. She wriggled her fingers and bent her elbow. Free. She was finally free. And finally her team leader again.

The bedroom curtains rustled as a warm summer breeze blew in through the window. Her mom had left it halfway open before she went out. The summer air felt good. It swirled around the room. It smelled like flowers. It acted like a lullaby.

Felicity shut her eyes, her fingers still wrapped around a fold in her nightshirt. Next to her, her sister said something in her sleep and flopped onto her back. She hated sleeping alone when their parents were out. Normally Felicity liked her room to herself— sharing the same face, same hair, and same birthday with her sister was enough. But tonight she was so happy that she didn't mind. Besides, they weren't alone. Deidre was right down the hall, listening to her cassette player and singing along. Her voice was really awful. The two girls giggled about that all the time. But they never said anything to Deidre. She was their babysitter, and she was very bossy. She was also eighteen and starting college. That made her practically a grown-up. And their mom and dad always told them they had to be respectful of grown-ups.

Even Deidre's bad singing wasn't enough to keep Felicity awake. Lots of physical activity after lots of sitting around had really worn her out. She drifted off to sleep.

She didn't see the window slide open the rest of the way. She didn't see the silhouette of a figure climb inside and cross silently over to the bed, going straight to her sister. Nor did Felicity see the intruder force a damp handkerchief over her face. But she did hear a whimper.

Groggily, Felicity rubbed her eyes and turned over. Still half asleep, she could vaguely make out a human form dressed in a long, loose black hooded sweatshirt. The person was leaning over the other side of the bed. As Felicity watched, her sister's whimpering stopped, and she went very still.

Felicity's small body went rigid, and her eyes snapped open. She was suddenly and fully awake. Who was in their house?

But there was no time to find out. The intruder straightened, and a gloved hand was clamped down over Felicity's mouth. She started to squirm, fighting with all she had. The sleeve of the sweatshirt brushed her forehead. Damp, with a funny smell. Like orange medicine.

The gloved hand lifted, and a wet handkerchief with that same orange medicine smell was pressed down on Felicity's nose and mouth. The smell was awful. Felicity wanted to scream. She couldn't. And she couldn't break free.

The room started spinning. Felicity caught a glimpse of her sister. It looked like there were two of her. And Deidre's singing sounded far away.