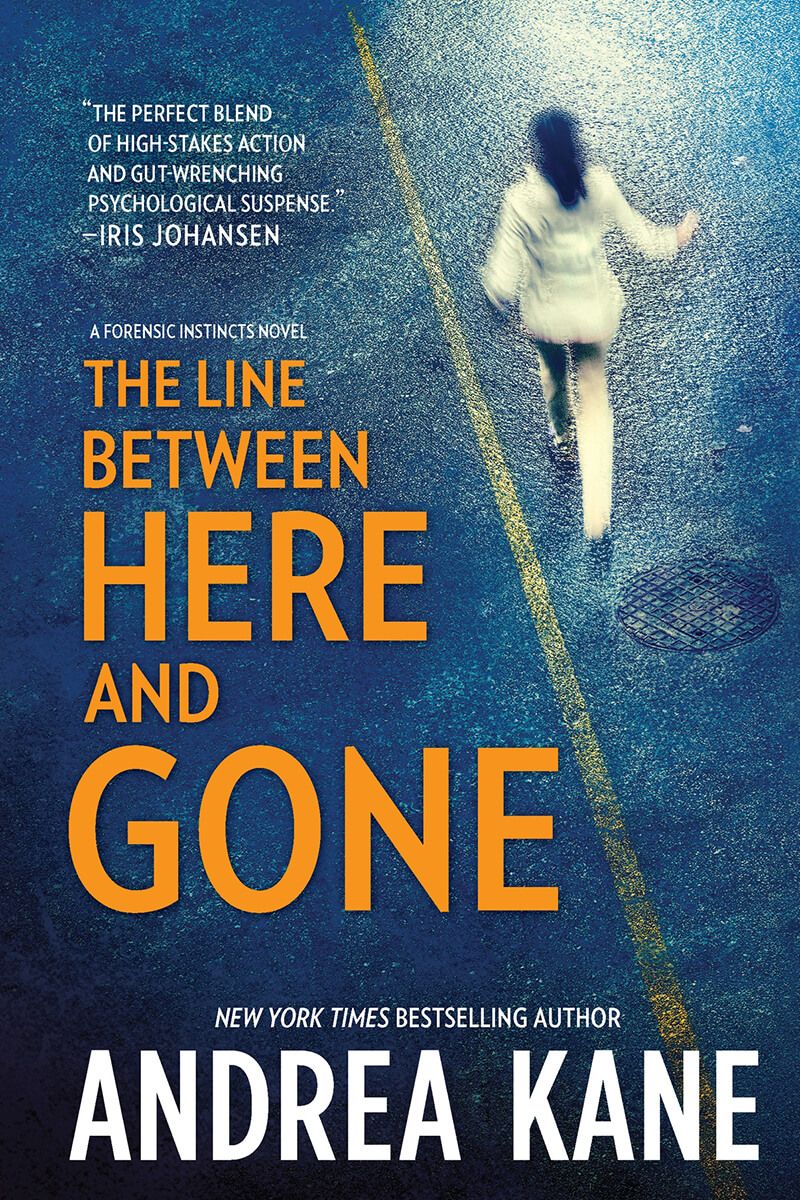 The Line Between Here and Gone
by Andrea Kane

Each day is a struggle for Amanda Gleason's newborn son as he battles a rare immune deficiency. Justin's best chance for a cure lies with his father, who was brutally murdered before Amanda even realized she carried his child.

One emailed photo changes everything, planting a seed of doubt that Amanda latches onto for dear life: a recent photo of a man who looks exactly like Paul. Could Justin's father be alive? The mother in her is desperate to find out. But tracking down a ghost when every second counts is not for amateurs.

Forensic Instincts is the one team up for the challenge.

A behaviorist. A former Navy SEAL. A techno-wizard. An intuitive. A retired FBI agent. A human scent evidence dog. Together, they achieve the impossible, pushing ethical and legal boundaries whenever the ends justify the means.

The manhunt is on for the elusive father. Yet the further the team digs into Paul's past, the more questions are raised about whether the man Amanda fell in love with ever really existed at all.

Dark secrets. Carefully crafted lies. From the Congressional halls of Washington D.C. to exclusive Hamptons manors, there are ruthless people who would stop at nothing to make Forensic Instincts forget about the man Amanda desperately needs to find.

Little do they realize that once Forensic Instincts takes the case, nothing will stop them from uncovering the shocking truth that transcends The Line Between Here and Gone.

Cold air. Bare trees. Christmas lights twinkling up and down the Tribeca street.

At 9:15 p.m. in this residential section of Manhattan, the four-story brownstone that housed the offices of Forensic Instincts was a secluded haven, isolated from the jungle of the city. Two sweeping willow trees marked either side of the brownstone, and a sense of peace made it seem more like a home than a workplace for Forensic Instincts.

Tonight was even quieter than usual. Casey Woods, the company President, was out holiday shopping with some friends. Most of the specialized team had taken the night off. They were all still recovering from the whirlwind of cases they'd tackled over the past month and a half—all of which had been dominated by an intense kidnapping investigation.

Marc Devereaux was the only FI team member who was on-site. And he wasn't working. He was in one of the empty meeting rooms, doing a hundred push-ups, feeling the sweat soak through his workout clothes, and hoping the intense exercise would help wipe away the mental ghosts that had come back, full-force, these past few months.

They'd stayed quiet for a while. But since the kidnapping of that little girl…

He dropped to the floor, forehead pressed to the carpet, breathing heavily. Memories cut deep. Even for a former Navy SEAL. Especially for a former Navy SEAL. Everyone thought they were impervious to emotional scars. They weren't. What he'd seen during those years might have made him a better FBI agent, and now a valuable member of Forensic Instincts, but they'd taken away something that could never be restored.

And left something dark and destructive in its place.

Marc's head came up abruptly as he heard the front doorbell ring. It couldn't be one of the team. They all had keys and knew the alarm code for the Hirsch pad. Instinctively, Marc reached for the pistol he'd placed on the table beside him. Rising, he walked over and eyed the small window on the computer screen displaying a view of the front door from the video surveillance camera.

A woman stood on the doorstep.

“Is this the office of Forensic Instincts?" the woman's voice asked.

“Yes." Marc could have pointed out the ridiculous hour. But he'd worked for the FBI's Behavioral Analysis Unit for five years. He could read people, and tones of voice. And this voice sounded dazed and shaken. Panicky. He wasn't about to ignore it.

“I? I didn't think anyone would be in. I just prayed you were.” Her words confirmed Marc's assessment. “I was afraid if I called you wouldn't answer. Please… may I come in? It's urgent. More than urgent. It's life or death.”

Marc had made his decision long before the end of her dire plea. He put away his pistol. “I'm on my way down.”